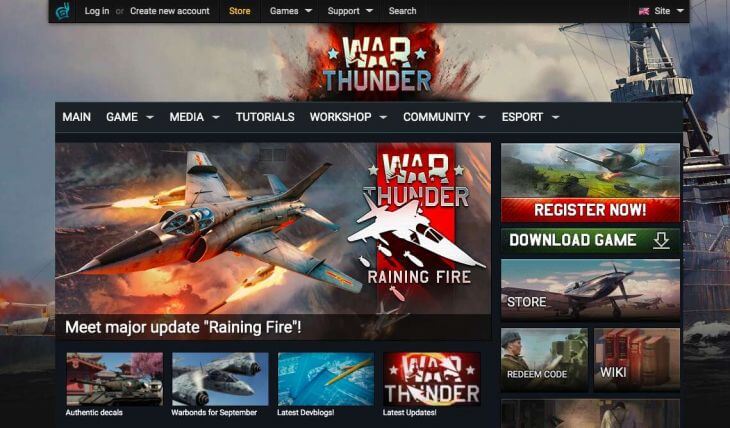 eCPC – 3.4309$
Hold period – 30day(s)
Banners – Yes
Deeplinking – No
Promocodes – No
CR – 8.33%
Cookie lifetime – 30day(s)
Landing pages – Yes
XML/CSV feed – No
War Thunder is a vehicular combat multiplayer video game developed and published by the Moscow video game developer studio Gaijin Entertainment. Announced in 2011, it was first released in November 2012 as an open beta with a worldwide release in January 2013; it had its official release on 21 December 2016. It has a cross-platform format for Microsoft Windows, MacOS, Linux, PlayStation 4, Xbox One, and Shield Android TV.
War Thunder is based around combined arms battles on air, land, and sea. According to the game’s creative director Kirill Yudintsev, it is the only game that encompasses all three of these experiences in one gameplay session. Vehicles range from the interwar period and the Spanish Civil War to the Iraq war and beyond, with an emphasis on World War II. Players can control aircraft, ground vehicles and warships from various nations, the major ones including the USA, Germany, Britain, Japan and the USSR. The game itself is divided into three main categories: Aviation, Ground and Fleet with game modes divided between Arcade, Realistic and Simulator that offer different styles of battle. In Aviation, gameplay is restricted to aircraft without helicopters whereas Ground Forces and Fleet will include their respective vehicle types of ground vehicles and warships alongside aircraft. A single player mode is available focusing on historical settings as well as a cooperative mode against AI ground vehicles and aircraft.
War Thunder won several awards following its release, winning Best Simulation Game at the Gamescom 2013 Awards as well as winning Best Game, Best Developer, Best Technology and Best Sound at the KRI 2013 Awards. The game also holds two Guinness World Records, for having the “most planes in a flight simulation game” and “most players online simultaneously on one Flight Simulation server”. As of 2019, War Thunder is among the most played games on Steam with over 25,000 concurrent players.
This offer is a true gift for all gamers around the world. Don’t hesitate! Just join Indoleads and start promoting it right now!