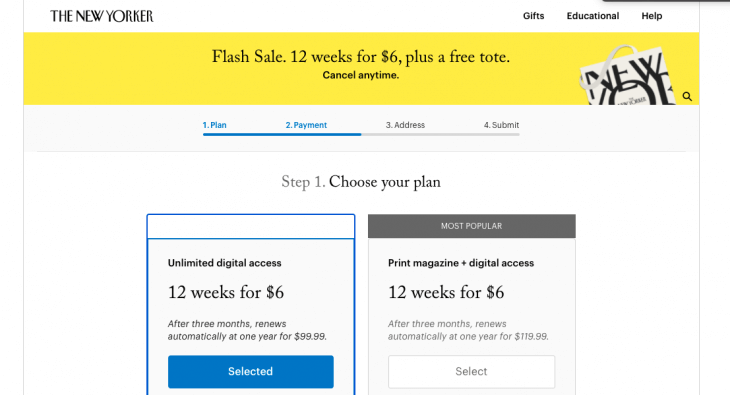 The New Yorker is an American weekly magazine featuring journalism, commentary, criticism, essays, fiction, satire, cartoons, and poetry. Started as a weekly in 1925, the magazine is now published 47 times annually, with five of these issues covering two-week spans. Although its reviews and events listings often focus on the cultural life of New York City, The New Yorker has a wide audience outside New York and is read internationally. It is well known for its illustrated and often topical covers, its commentaries on popular culture and eccentric Americana, its attention to modern fiction by the inclusion of short stories and literary reviews, its rigorous fact checking and copy editing, its journalism on politics and social issues, and its single-panel cartoons sprinkled throughout each issue.
Digital subscribers have access to the complete archive of the New Yorker, which includes a digital replica of every issue of the print magazine, from 1925 to today. Their website, newyorker.com, features the full contents of each week’s magazine, plus up-to-the-minute reporting and commentary by prominent New Yorker writers. Readers can also  watch videos, listen to the podcasts, explore other interactive features, solve their famous crossword puzzles, and enter the Cartoon Caption Contest from the site.
Despite its title, The New Yorker is read nationwide, with 53 percent of its circulation in the top 10 U.S. metropolitan areas. This magazine is already loved by millions of Americans and also a lot of foreigners as well, so what are you waiting for? Grab this offer and start earning right now by joining Indoleads!
eCPC – 0.0000$
Hold period – 30day(s)
Banners – Yes
Deeplinking – No
Promocodes – No
CR – 0%
Cookie lifetime – 30day(s)
Landing pages – Yes
XML/CSV feed – No