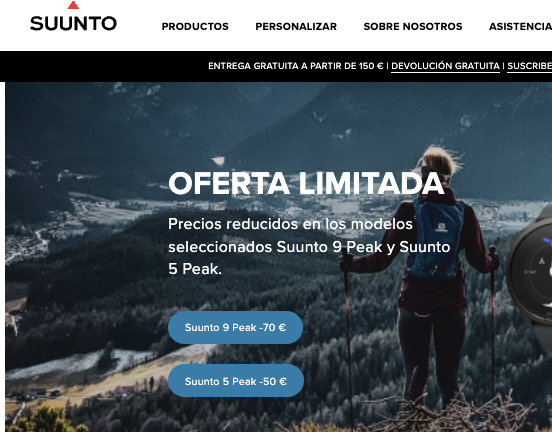 What is Suunto Affiliate Program

Suunto (Suunto Oy) is one of the biggest players in the Finnish market which manufactures and markets sports watches, dive computers, compasses and precision instruments. It’s headquartered in Vantaa, Finland, and its products are sold in over 100 countries. Although globally active, the headquarters is placed next to the factory, in which most of the work stages are still handcrafted. Suunto is a subsidiary of Amer Sports, owned since 2019 by the Chinese group Anta Sports, with sister brands Wilson, Atomic, Sports Tracker, Salomon, Precor, Arc’teryx.

Suunto has a great variety of products:

Suunto  makes multi-function electronic wristwatches such as the Core, Ambit, Vector, X-Lander, and X10, which can provide a variety of functions including compass bearings, altitude, training effect and even GPS location, depending on model. Suunto’s multi-function electronic sport watches are made for different sports like sailing, golfing, hiking, mountaineering, alpine skiing and training. G-, S-, T- and X-series of sport watches present an era when products with number 3 were described as entry level, number 6 as advanced and 9 as professional or high-end.

Suunto T6 with its later versions T6C (=Comfort belt) and T6D (=Dual belt) was one of the most advanced among heart rate monitors at the time of its release in 2004. It has, among other features, rate-to-rate recording of heart rate, an altimeter based on air pressure, calculation of EPOC and training effect and support for external POD devices measuring speed and distance.

When publishing Kailash, Suunto also introduced their new approach, separating branches: together with Essential and Elementum, Kailash is now forming a new branch called Suunto 7R, which is a collection of lifestyle watches, while watches for sports and performing present a separate category. Suunto Kailash was published on October 14, 2015. It includes a GPS-receiver but premium appearance is its main feature. This product is mainly designed for travelers. Kailash is also the first product of forthcoming Suunto world series.

In 1965, a British sport diver noticed that Suunto’s liquid filled compass also worked underwater. Following this revelation, it didn’t take long before Suunto’s first dive compass, SK-4 was launched and became well known for its durability and reliability. Among the users were explorers, ecologists and famous sea-dwellers like Jacques Cousteau. During the 1980s, Suunto became a leader in the manufacturing of diving instruments. Having previously produced mechanical instruments, Suunto now started the production of electronic diving computers and launched the SME in 1987. This was Suunto’s most significant innovation of the decade and a major influence on scuba diving’s transition to a popular sport.

Why you should sign up for Suunto Affiliate Program

Suunto is a Finnish brand and an online store of high-quality gadgets and accessories. Suunto Affiliate Program is perfect if your audience is leading an active lifestyle and wants using the accessories and instruments which will fit this lifestyle. Suunto Affiliate Offer is a brilliant choice for you as a publisher. Just sign up at Indoleads and start earning real money with our amazing offers! For more affiliate programs like Suunto, visit Indoleads Affiliate Program Marketplace.