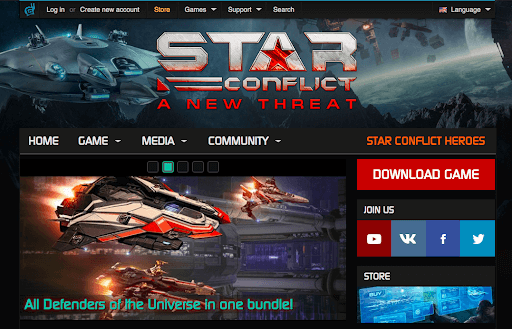 Published : 14 Oct 2020   author : Indoleads Bot
eCPC – 2.4454$
Hold period – 30day(s)
Banners – Yes
Deeplinking – No
Promocodes – No
CR – 4.55%
Cookie lifetime – 30day(s)
Landing pages – Yes
XML/CSV feed – No
Star Conflict is a free-to-play dynamic massively multiplayer online game space action game. The gaming platform Steam describes it as an “action-packed, massively multiplayer space simulation game”. The core of the game is PvP spaceships battles, PvE (Co-Op) missions and an open world. The game uses a free-to-play business model.
Star Conflict has been developed by the Russian company Targem Games (StarGem department) and published by Gaijin Entertainment. The game started on February 1, 2012 and reached open beta test on July 24, 2012. It has been available on Steam since 2013.
According to gameplay the galaxy is divided between the militant star empires and independent mercenary groups. In a remote corner of the galaxy – Sector 1337, the area of the dead – a world has been left behind. Here, the ruins of a great civilization of aliens have recently been discovered. Mercenaries and adventurers from all over the galaxy are flocking into the sector without consideration of the danger. The player controls combat spaceships with different roles. Each player can develop abilities, establish specialized skills, and perfect tactics.
The game world consists of many separate locations, connected by warp gates. The game has PvP and PvE game modes, as well as an “open world” sandbox. There is also a “Sector Conquest” mode, involving corporations (clans). This action space game also has MOBA elements.
In PvP mode players are divided into two opposing teams and must perform a specific task, such as: capture all the beacons, destroy all enemy ships, etc. There are several PvP modes with different combat missions, terms and conditions. In Open Space mode the alien Biomorphs (a new NPC race) invaded known space. To counter this threat, the factions had to mobilize all of the mercenaries (the players).
Star Conflict will definitely be the top choice for your audience! Join Indoleads right now and let’s start the ball rolling!