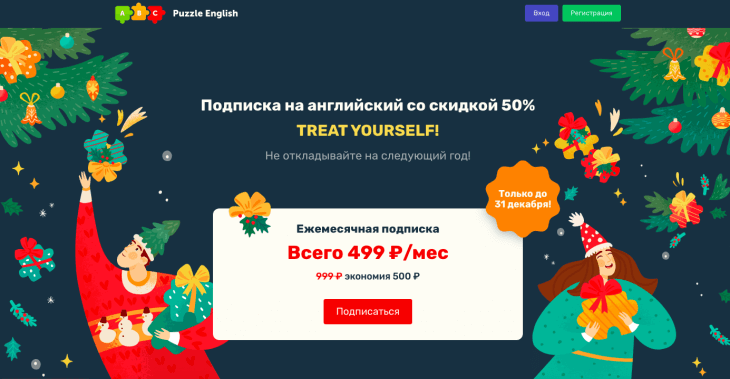 The Puzzle English site appeared in 2011 as the author’s project of Alexander Antonov. Now it’s a huge service for watching TV series with subtitles in English and Russian as well as a service with video courses with native speakers.

The basis of the learning format in Puzzle English is listening comprehension training. Phrases, voiced by English and American speakers, are presented in the form of audio and video puzzles. In addition, the site has video grammar lessons and assignments to consolidate the skills the user has already learnt. There are also tons of video clips, TV series and songs to learn English faster and much more effectively.

Another teaching method in Puzzle English is the Teacher method. This program was launched in 2015 and was intended for users with zero knowledge of the language. Learning begins with the alphabet, familiarity with pronunciation, sounds and transcription, and then moves on to writing and understanding the language.

In a year after the first investment in the company, revenue in monthly terms increased more than 100 times, and the number of registered users increased 45 times. In the second half of 2015, the monthly audience of Puzzle English was about 300,000 users, of which 15,000-20,000 return to the site every day. By the end of 2017, more than 4 million people studied English at Puzzle English. According to Maxim Shekhovtsov, Managing Director of Genezis Capital, the conversion of users into paying clients for the project is the highest on the market – 5% (for LinguaLeo – 4%).

Puzzle English is definitely a great source for everyone studying English, and that’s why it would be ideal for your audience if they are interested in learning English. Join Indoleads right now and let’s start the ball rolling!

You will also be interested
Other categories
Ecommerce Affiliate Programs