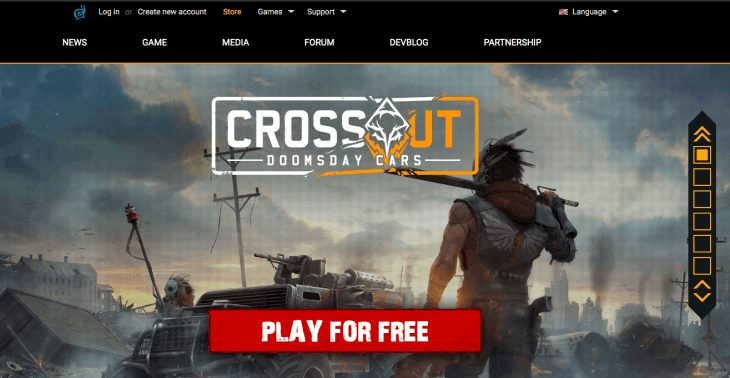 eCPC – 0.0000$
Hold period – 30day(s)
Banners – Yes
Deeplinking – No
Promocodes – No
CR – 0%
Cookie lifetime – 30day(s)
Landing pages – Yes
XML/CSV feed – No
Crossout is a free-to-play vehicular combat video game developed by Targem Games and is published by Gaijin Entertainment for Android, Windows, PlayStation 4 and Xbox One.
The gameplay is announced to be focused around the creation and subsequent upgrade of the player’s vehicle through combat and trade as well as the crafting of new items. Described as a crafting and combat MMO, the game allows players to construct their own vehicles to be used in PvP engagements with real players and PvE missions involving AI participants.
The game depicts a post-apocalyptic setting after a nuclear war and “human genetic testing gone awry”, showing some resemblance to the Mad Max universe. Events of Crossout take place in the same universe as Ex Machina’s (aka Hard Truck: Apocalypse in the North American market), which is also a Targem-created game published by Buka in 2005. Crossout aims to depict life on Earth 20 years after the 2027 global disaster, and 200 years before Ex Machina.
Crossout is definitely one of the most beloved games among gamers all over the world. It’s graphics and gameplay are just amazing! Want to promote it? Join Indoleads right now and let’s start the ball rolling!