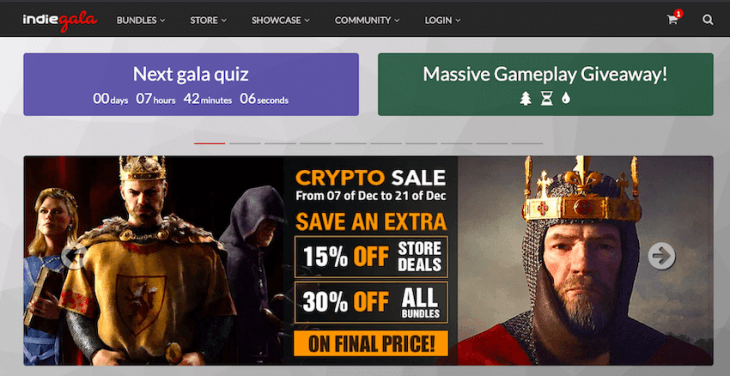 Published : 08 Dec 2020   author : Indoleads Bot
Indiegala is a digital distribution platform which launched in December 2011. Anyone who likes videogames, especially PC games that can be redeemed on Steam, will find on Indiegala PC games at the best prices one can find on the market in quick deals limited by time or quantity!
IndieGala is a series of video game bundles similar to the Humble Bundle, but with games offered generally only for Microsoft Windows, and usually with digital rights management (DRM).
Most games, so far, have been Steam keys and not direct downloads. Exceptions include, but are not limited to, Vizati in the first Gala, Fruit Blitz for Android in the second Gala, as well as the original Postal game for Mac, Linux and Windows, also in the second Gala. Similar to Humble Bundle, buyers can set the revenue split between the developers, charities and organizers.
A peculiarity of the IndieGala bundles, which distinguishes it from other similar sites, is to give to music albums almost the same prominence as that given to the games. Their bundle sales give users amazing games at the price of a cup of coffee!
Over 3000 ( and growing ) titles at individual discounts can be found on IndieGala. From indie gems to AAA blockbusters they offer a wide selection of PC games. Indiegala is an official partner of publishers like BANDAI NAMCO, TECHLAND, DEEP SILVER, NORDIC GAMES, ICEBERG INTERACTIVE, PARADOX, TEAM 17, and many many more!
This is a true gem among deals for all of those who are in love with games. Just catch it right now without any hesitations! Join Indoleads and start earning with IndieGala.
eCPC – 0.1750$
Hold period – 40day(s)
Banners – Yes
Deeplinking – No
Promocodes – No
CR – 25%
Cookie lifetime – 1day(s)
Landing pages – Yes
XML/CSV feed – No

You will also be interested
Other categories
电子商务 Offer