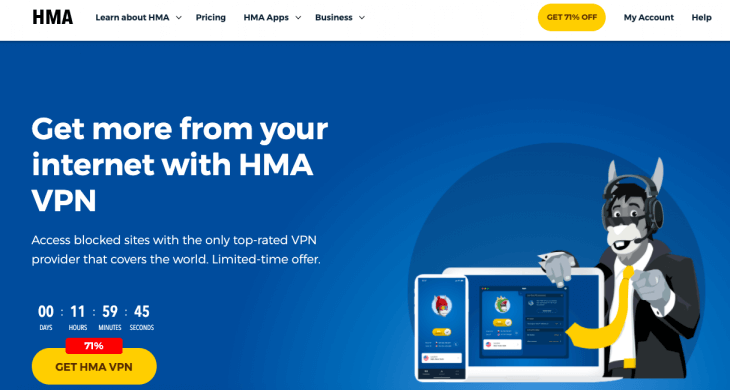 What is HideMyAss Affiliate Program
HideMyAss Affiliate Program is a popular Software & Services Affiliate Program. This VPN service is one of the most sought after on the web and that’s because it’s truly effective in helping users remain anonymous online and encrypt their online traffic.   Joining HideMyAss Affiliate Marketing Campaign, gives your site visitors access to the premium HideMyAss service which hides the user’s IP address and other identifying information by routing the user’s internet traffic through a remote server. HideMyAss Affiliate Offer is for anyone who uses the Internet on a daily basis, so we bet your audience will enjoy the offer. HideMyAss Affiliate Commission is one of the highest for this category, so don’t hesitate to sign up right now.
About HideMyAss
HideMyAss was created in 2005 in Norfolk, England by a sixteen years-old Jack Cator in order to circumvent restrictions his school had on accessing games or music from their network. According to Cator, the first HideMyAss service was created in just a few hours using open-source code. The first product was a free proxy website where users typed in a URL and it delivered the website in the user’s browser.
In 2013, HideMyAss added software to anonymise internet traffic from mobile devices. In 2014, the company introduced HideMyPhone! service, which allowed mobile phone users to make their calls appear to come from a different location.
By 2014, the service had 10 million users and 215,000 paying subscribers of its VPN service. It made £11 million in revenue that year. HideMyAss had 100 staff and established international offices in Belgrade and Kyiv.
By 2015, HideMyAss became one of the largest VPN providers. In May 2015, it was acquired by AVG Technologies for $40 million with a $20 million earn-out upon achievement of milestones, and became part of Avast after its 2016 acquisition of AVG Technologies.
The company offers a vast network of 1,100+ servers in 290+ locations across 190+ countries. That’s fewer servers than some of the top providers, but many more locations and countries. HideMyAss has its own DNS service to help avoid DNS leaks and, as a bonus, it also blocks malicious and phishing sites.
HideMyAss works on all your devices. Not only are there custom apps for Windows, Mac, Android, iOS and Linux, but there’s installation advice to help users manually set up the service on many other platforms. And that includes the ability to configure some routers, which allows users to use the service with all your smart devices, too.
HideMyAss has put itself through an independent security audit, and passed, allowing the company to proudly claim it’s now a ‘certified no-log VPN.’ This VPN has an excellent user experience and has taken strides to improve its practices to better protect its customers. Still, it has a high up-front cost, and comes without many of the tools more affordable competitors include.
HMA provides quick speeds and a wide selection of servers, alongside top, military-grade encryption protocols that keep the connection secure. It also has 2 kill switches and an IP shuffle feature that hides your internet activities.
This incredible offer is for everyone who uses Internet for business and personal goals. We all know that nowadays VPN is no longer something only IT specialists use. While traveling a lot of people face the problem of not being able to get access to favourite resources due to some restrictions in the countries, and VPN makes it possible to use Internet freely and comfortably. This software provides some great features which are actually similar to big brands products, but are actually much more affordable. Ready to promote HideMyAss? Just join Indoleads and start earning like a pro! For more affiliate programs like HideMyAss, visit Indoleads Affiliate Program Marketplace.
eCPC – 0.0000$
Hold period – 45day(s)
Banners – Yes
Deeplinking – No
Promocodes – No
CR – 0%
Cookie lifetime – 30day(s)
Landing pages – Yes
XML/CSV feed – No